Earlier in the year, our Travel expert Hannah went to explore some of the fascinating landscapes Uzbekistan has to offer. Read her travel diary to see what she got up to on her trip, from the glittering Turquoise Domes of Registan Square to the amazing roof top views of Bukhara.

Once we arrived at the airport, immigration was quick and stress free with no visa requirements for British Citizens staying for 30 days or less. Our guide Damir met us at the and escorted us to our first hotel where we were able to get some food before our afternoon tour and evening flight later in the day. 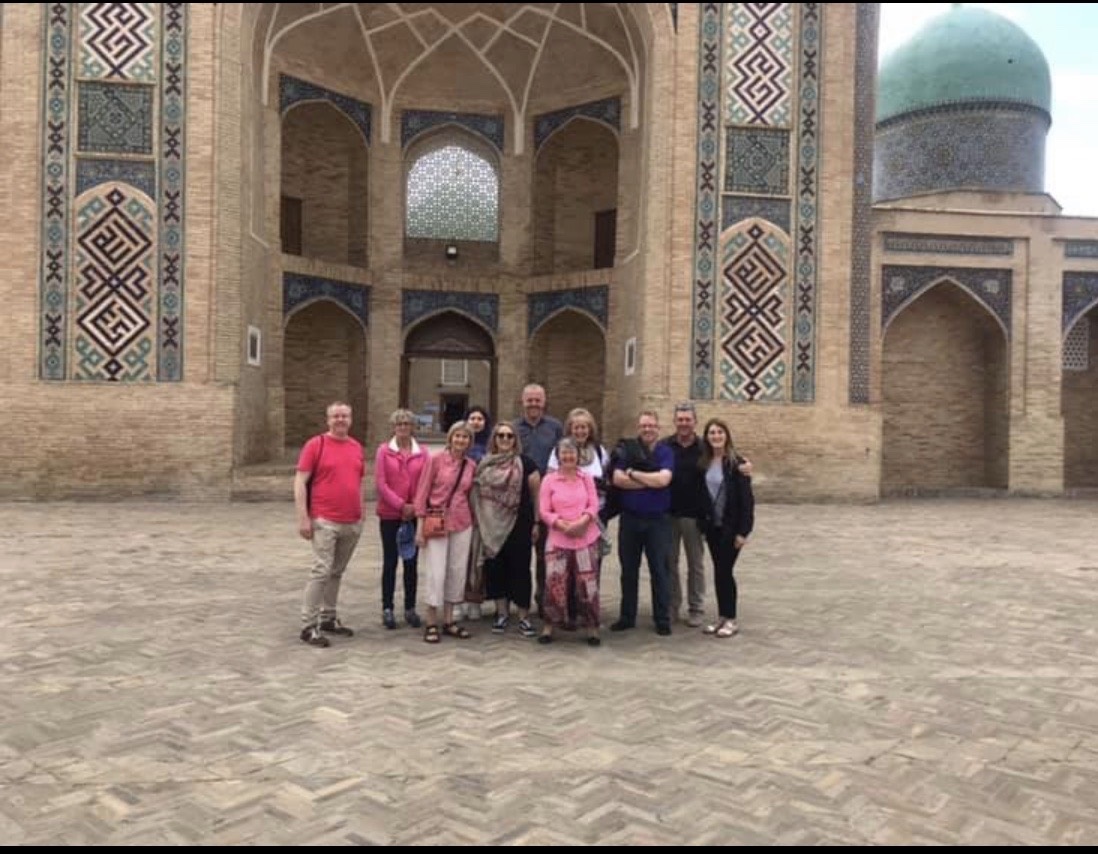 After lunch we began our afternoon tour of Tashkent Hazrat Imam Complex, which is the historical spiritual heart of Tashkent and got a glimpse of what the city must have been like before it was levelled in the 1966 earthquake. Surrounding the square are numerous sites, without doubt the most important is the Muyi Mubarak Library where the world oldest Qur’an is displayed.

Dinner in the evening was arranged at a local restaurant in downtown Tashkent. We were served traditional Uzbek bread and salad as a starter and big dishes were brought out for everyone to share. Our main meal was lamb donor kebabs with sweet white onions and paprika. Drinks were included and we got to try local Uzbek beers, wines and vodka. 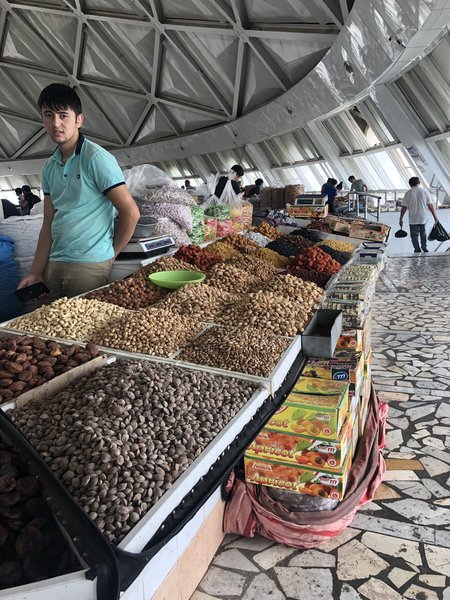 After a long day and a good night's sleep we were ready to go again. Today we explored the ancient city of Khiva which is less than 5 minutes’ walk from the hotel and went into the inner wall of Old Khiva.

There was once nearly 1,000 Mosques in Khiva with the oldest Mosque being the Juma Mosque which originates from the 10th century. The most commonly photographed Minaret in Khiva is the Kalta Minar. 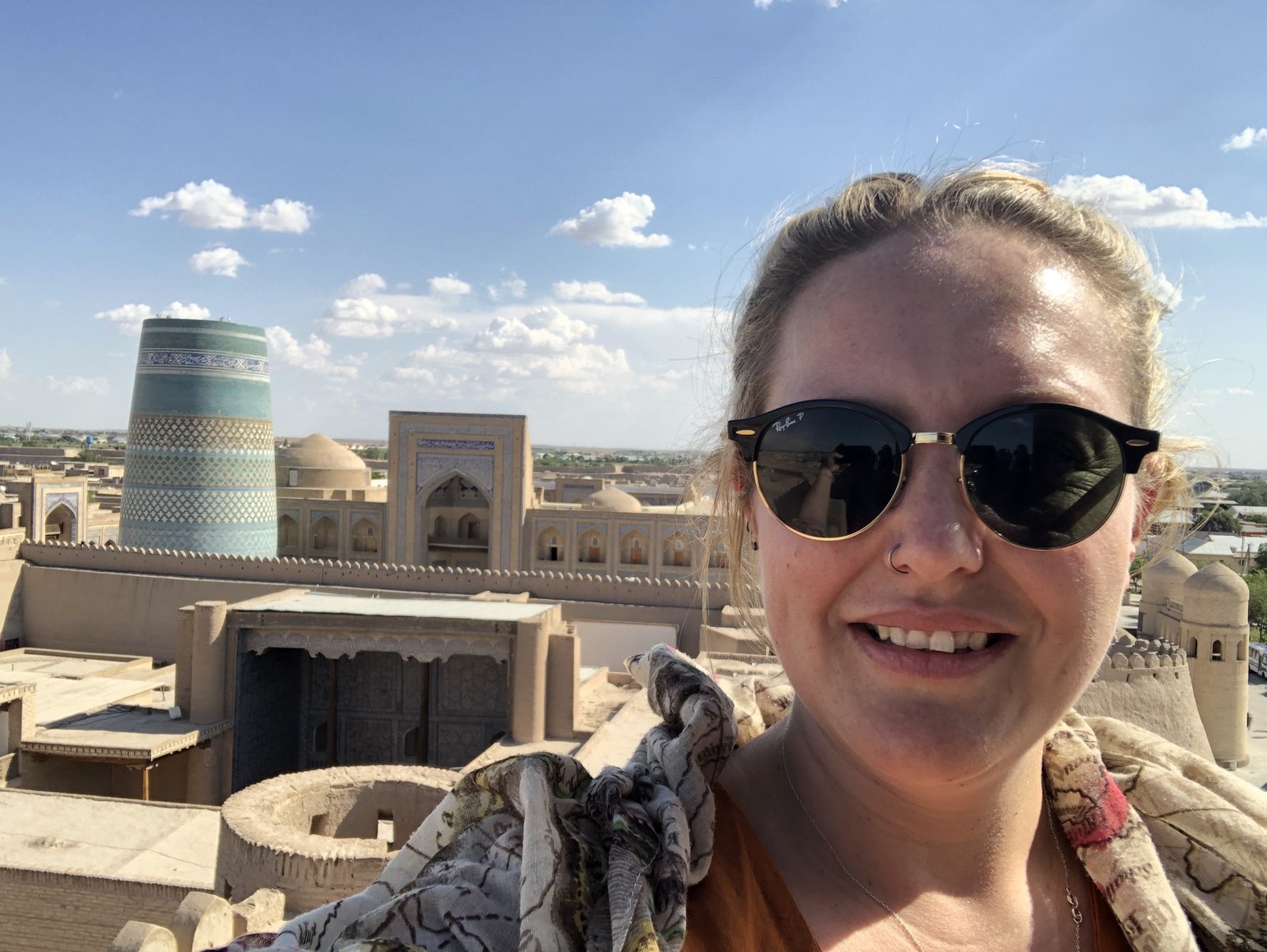 This eye catching green and turquoise landmark was meant to be the tallest minaret in Central Asia. It’s Patron Muhammad Amin Khan planned for it to be at least 70m tall so you could see Bukhara from the top. Standing at 29m tall it is 12m in diameter on the ground and 9m in diameter at its highest point. It was to be the first minaret completed decorated in colourful tiles. The building is constructed with around 213 elm columns, 6 of which have been restored from the earliest period of the building’s history. 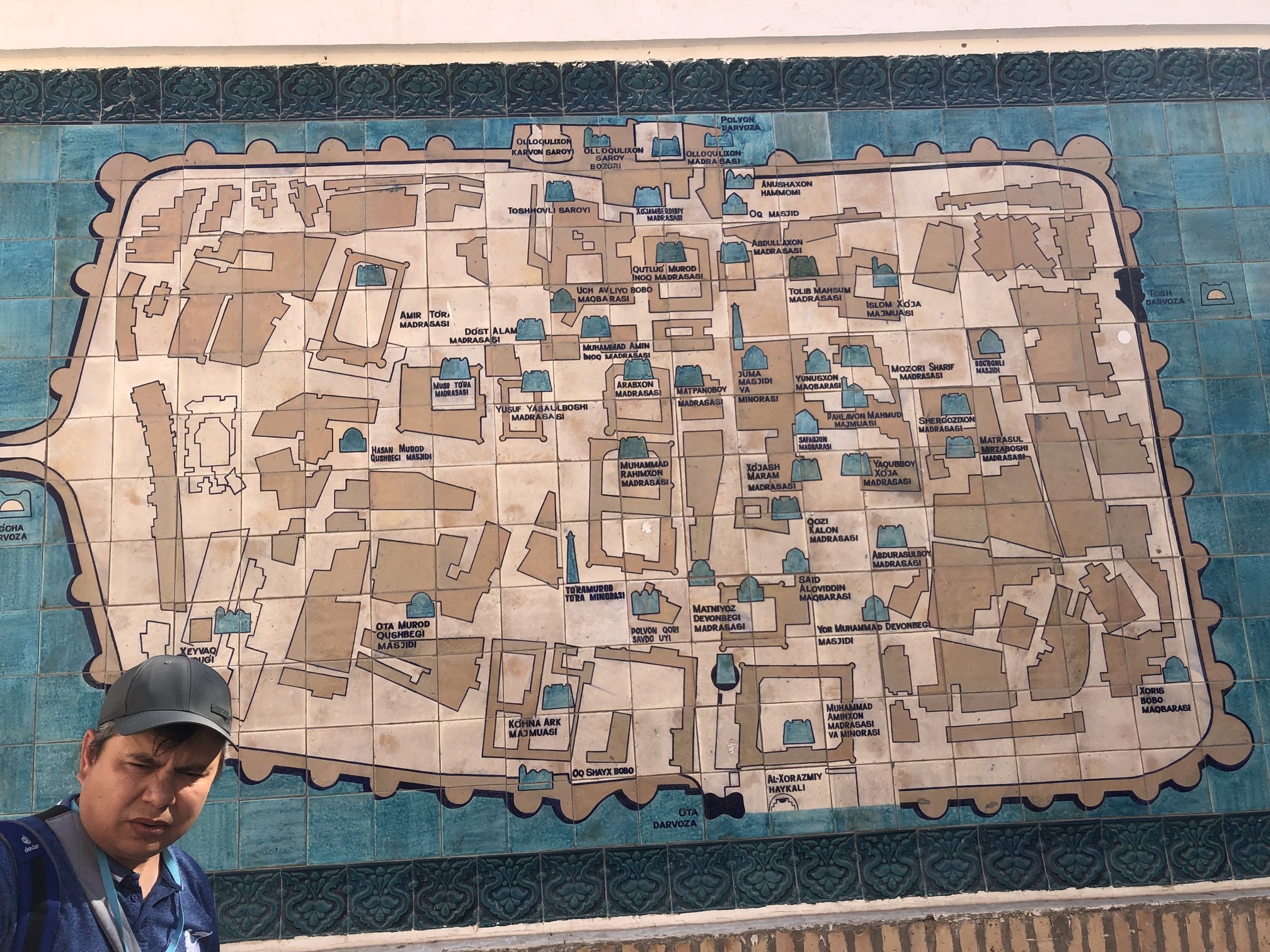 Today we drove the long drive from Khiva to Bukhara through the Kyzylkum desert, with a photo stop at Amudaryo river bank. Total distance is approximately 480km and the journey time is about 7 to 8 hours. This is typical mode of transport on group tours but clients not keen on the bumpy drive through the desert can opt for the train on tailor made itineraries. We also visited the surviving trade domes and Lyab-i-Hauz complex

In the evening we dined at the Minzifa restaurant with amazing roof top views or Bukhara.

Situated on the Silk Route, Bukhara is the most complete example of a medieval city in Central Asia and for a long time was an important economic and cultural centre. The city has an amazing array of monuments covering 1,000 years of history including the celebrated Kalyan minaret, built in 1127.

Today we visited the Chor Minor mosque and Kalyan minaret and other sights visited today included the Ulugbek madrasa and the Abdullazizkhan madrasa, built in 1651. In the evening we dined with a local family in their home and enjoyed a traditional homemade Uzbekistan rice dish (Plov), which I assisted in the making of! 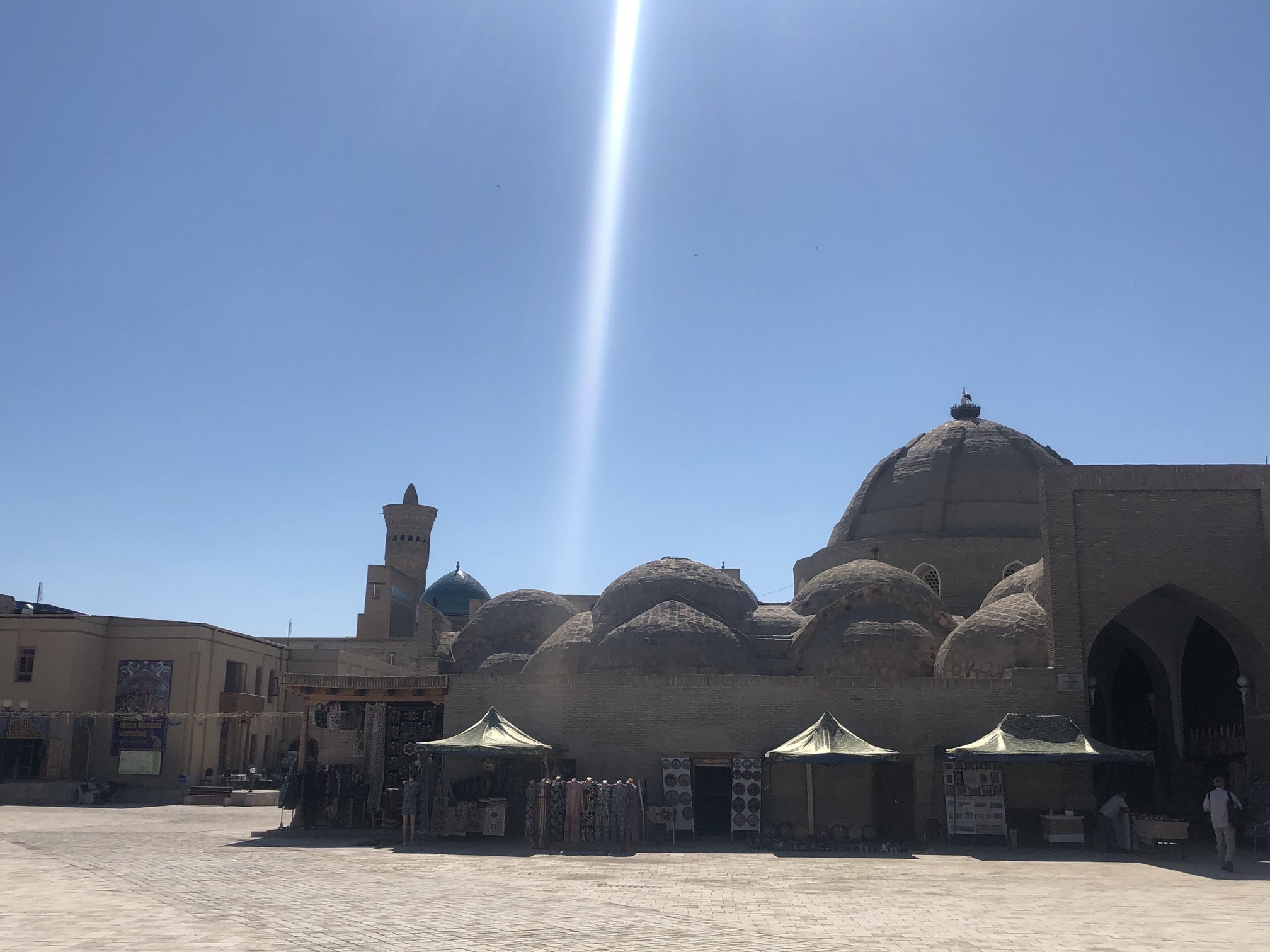 The Kalyan minaret is 47 metres tall and was the tallest structure in Central Asia when built by Arslan Khan in 1127. As well as serving in a traditional capacity to announce the call to prayer, the minaret has also been used during its history as a beacon and a watchtower, while the final dynasty of emirs persisted in throwing criminals from the top of it until ordered to cease by the Russians. 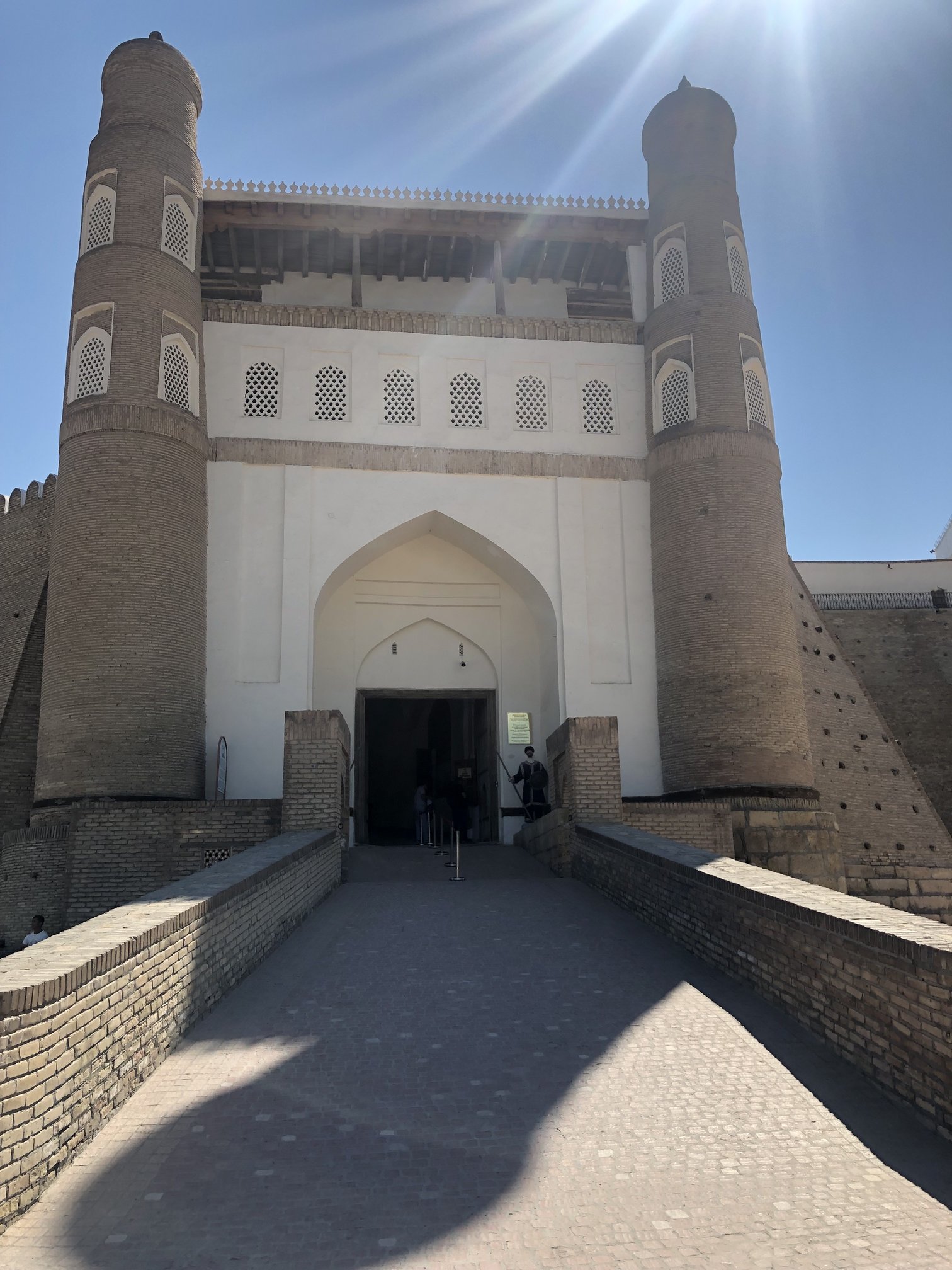 In the evening we dined with a local family in their home and enjoyed a traditional homemade Uzbekistan rice dish (Plov), which I assisted in the making of! 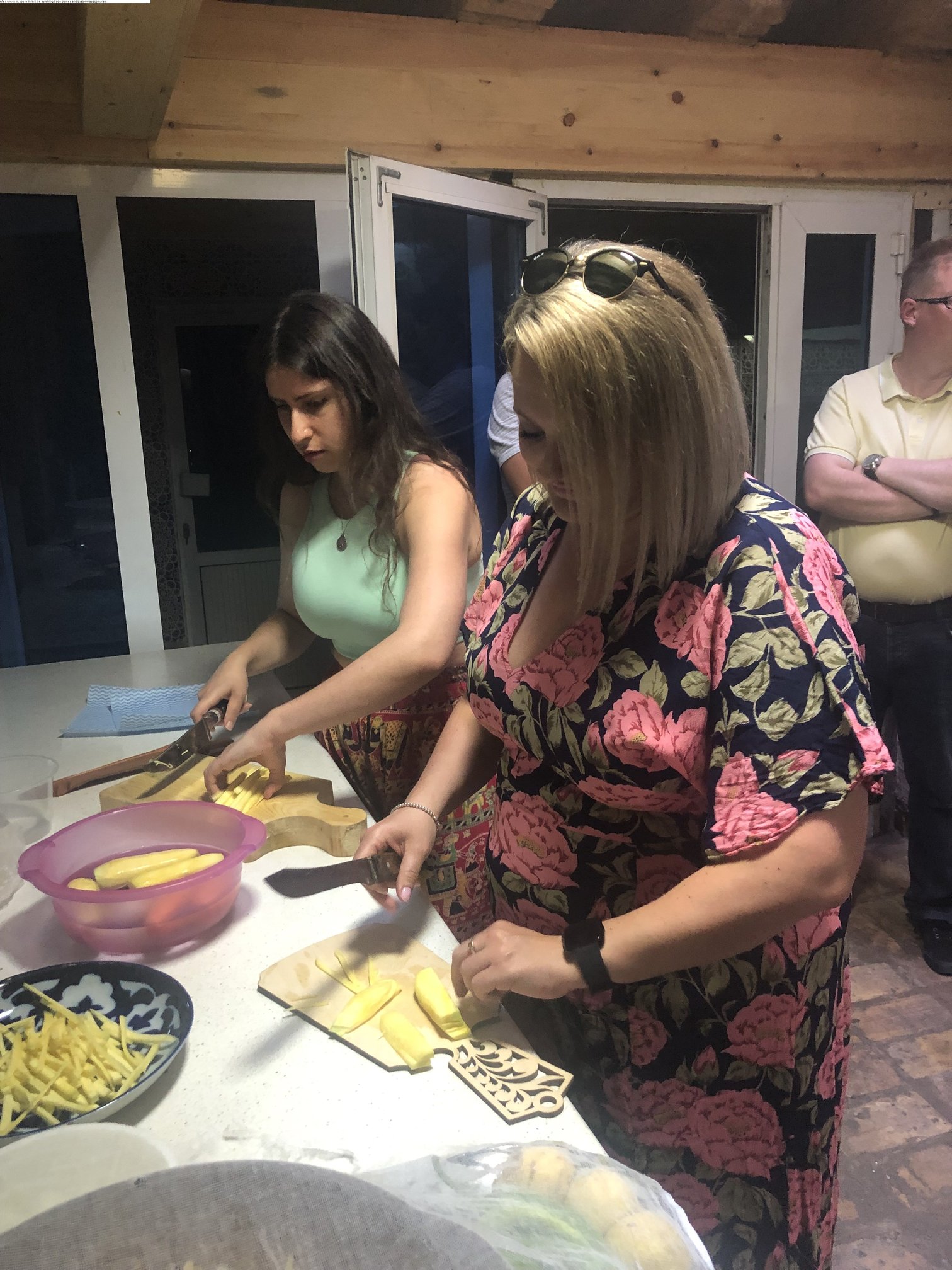 Today we continued our drive back towards the Capital stopping at Vobkent, Gidjuvan and overnight in Samarkand. Travel by road from Bukhara to Samarkand is a total distance of 300km and journey time of approximately 4 hours. Clients can choose to travel by rail if they prefer. We stopped in Gijduvan which is well known in Uzbekistan for its beautiful glazed ceramic from a family run business in its 7th generation. 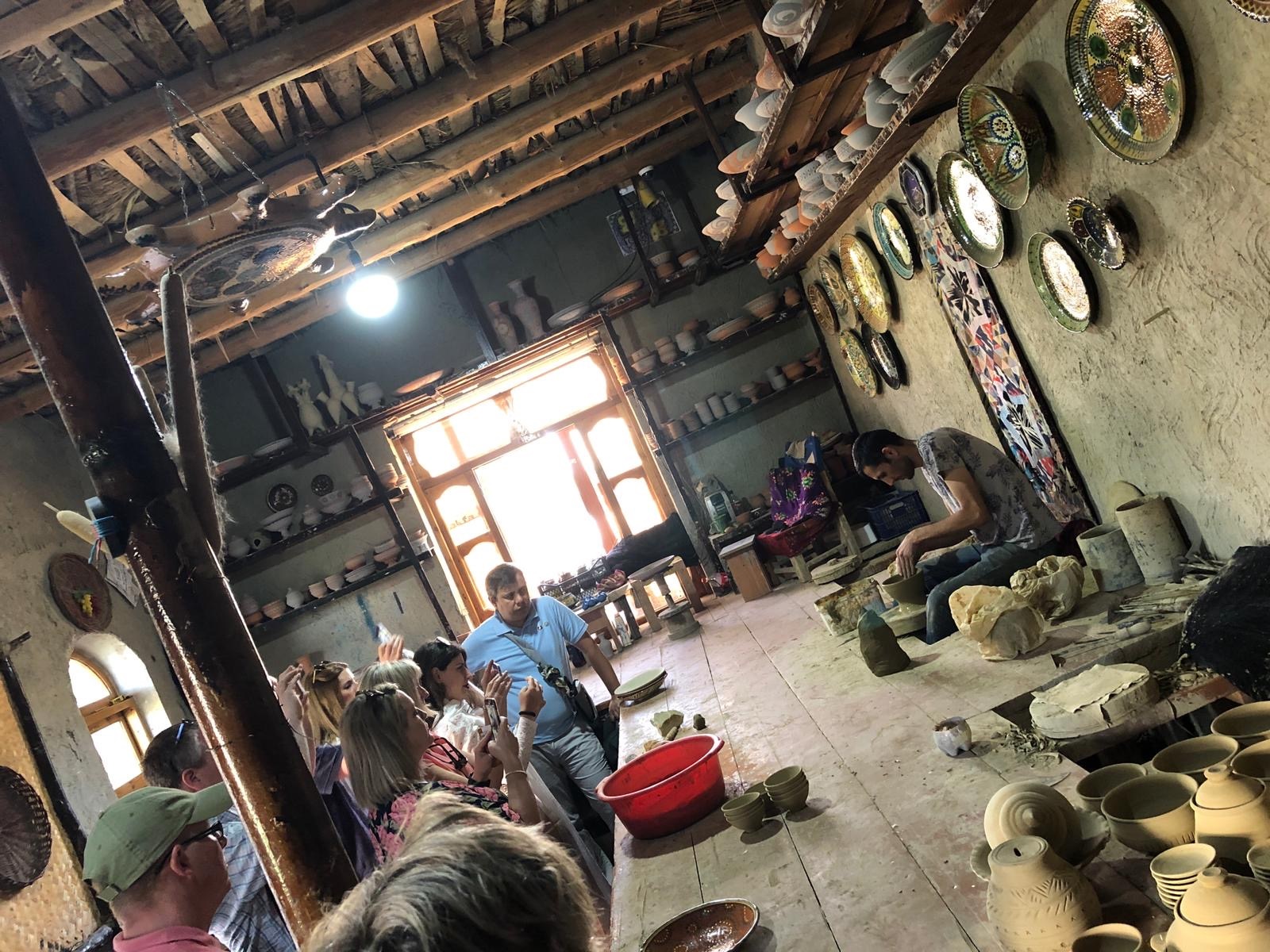 Samarkand is one of the world's oldest cities, located in the very centre of Uzbekistan.

The Registan is the heart of Samarkand, a vast square enclosed on three sides by the towering facades of three madrassas, beautifully decorated in delicate tile work that compliments the sheer scale of these buildings.

The size and ambition of the Bibi Khanum Mosque are simply breath taking. Constructed by Timur to be the most impressive building in his dominions, and built in honour of one of his wives, it was not only enormous but also spectacularly decorated. It is still, 600 years after it was built, one of the largest mosques in the world. 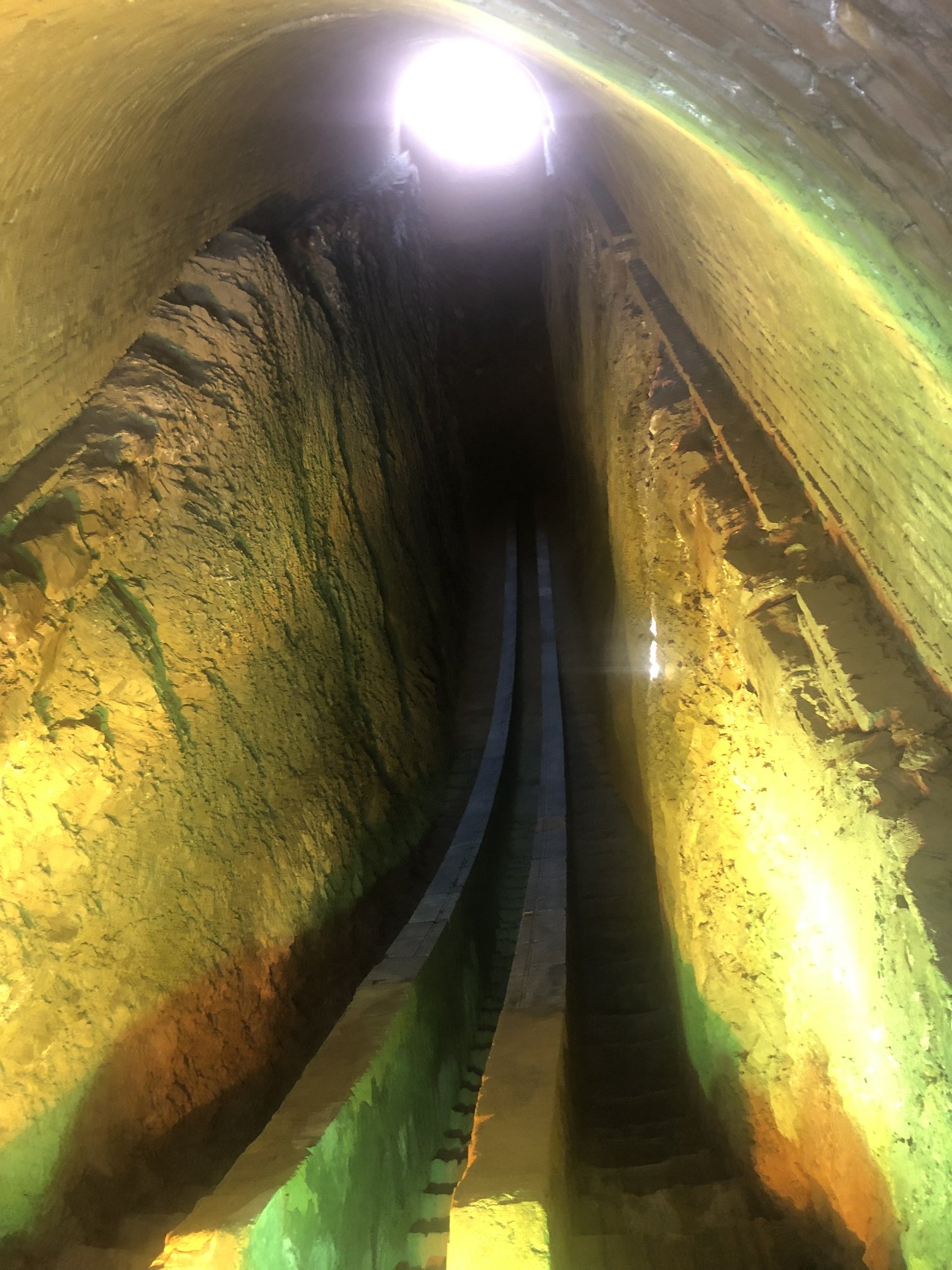 Today we continued our tour of Samarkand including the remains of an enormous observatory built by Timur's grandson, Ulug Bek, the Shah-i-Zinda complex, a street of tombs with some of the best examples of traditional tile work in the region, the Afrosiab Museum, and the bazaar.  We finished the day sampling Uzbekistan’s rail service travelling from Samarkand to Tashkent onboard the Afrosiyob train. The train journey to Tashkent takes, passing through villages and farmland before approaching the suburbs of Tashkent. 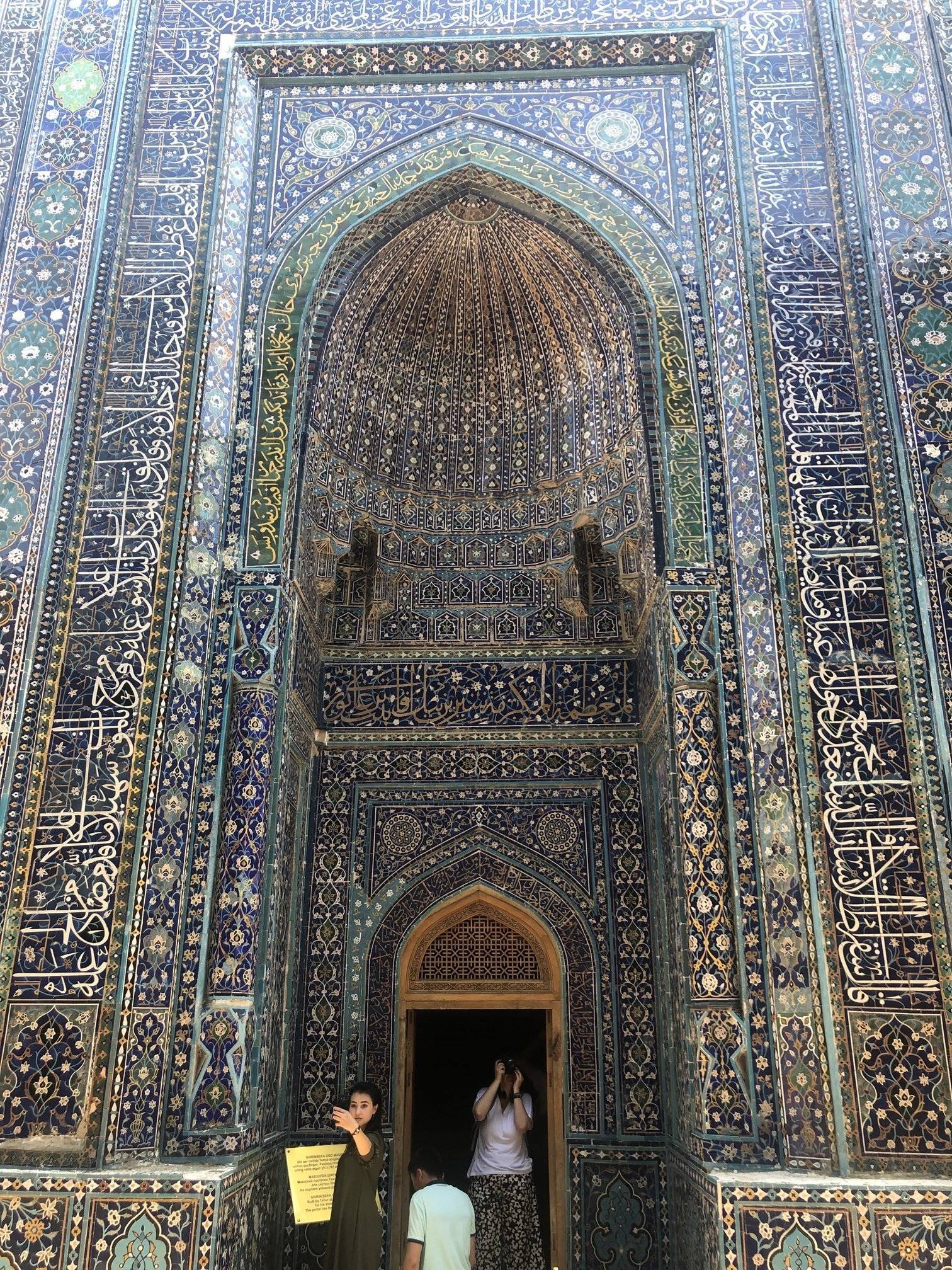 This morning we visited Navoi theatre Square and Amir Temur Maydoni, the vast square at the heart of Soviet Tashkent and visited some of the Metro Stations in the Capital City.

The square was once dominated by a statue of Marx, now replaced by a statue of Timur, also known as Tamerlane, the nomadic leader who conquered vast swathes of territory extending to Turkey and India. 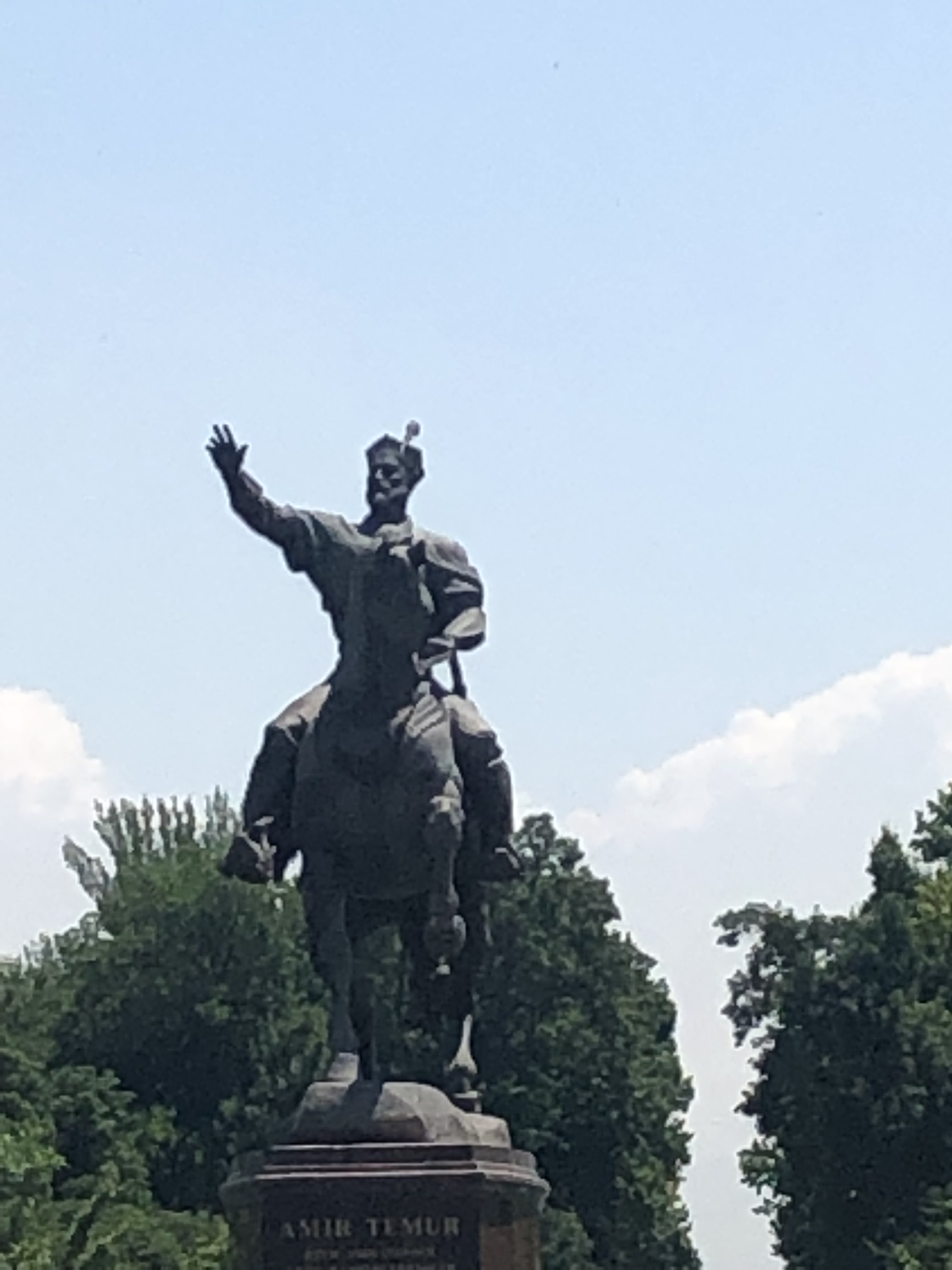 Uzbekistan is full of incredible architecture and ancient cities, all linked to the fascinating history of the Silk Road. If you’re looking for a culturally diverse holiday for of exploration and colour, there is no better place than Uzbekistan!

Speak to Hannah & the team about your Uzbekistan holiday

10 of the Best European Christmas Markets to Visit in 2021